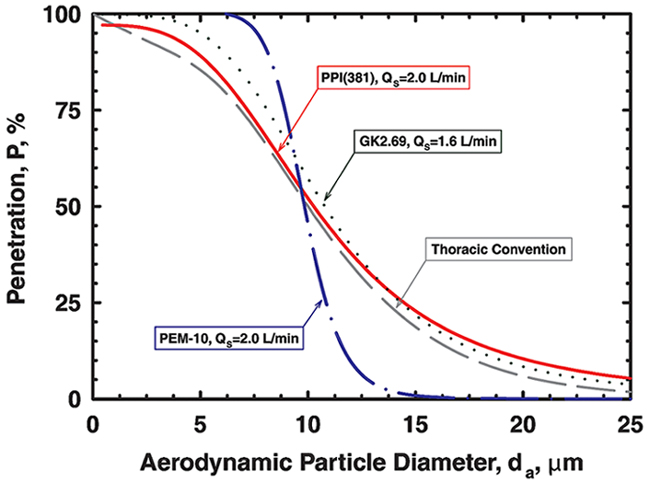 Since 2004 the ACGIH TLV for sulfuric acid of 0.2 mg/m3 has carried with it a ‘T’ endnote, indicating that this TLV applied to the portion of the mist being sampled capable of penetrating the pulmonary tract into (and beyond) the Thoracic region.  This lower TLV (as opposed to the OSHA PEL of 1.0 mg/m3) is based on the theory that the farther a substance can penetrate into the respiratory tract, the more harmful it becomes.  Trying to sample the thoracic fraction of a sulfuric acid mist has caused hardships since a practical method did not really exist.

This means that when using a device to measure the thoracic fraction, 50% of the particles having a diameter of 10 microns or larger are captured. In practical terms this means that particles large enough to be captured by the body’s defenses prior to entering the thoracic region are screened during the breathing process.

The current OSHA procedure for measuring the total concentration of sulfuric acid calls for sampling on a standard 37 mm MCE filter at 2 LPM, followed by analysis using ion chromatography.  Using this method, if the results of this sampling fall below the thoracic TLV, then you can assume you have no problem.  Similarly, a high result above 1 mg/m3 indicates a problem that needs to be fixed, thoracic or not. As with all industrial hygiene analyses, it is the gray area in between these two examples that causes a problem.

In the past, SGS-Galson has recommended the use of SKC’s PEM sampler as the best alternative for sampling the thoracic fraction.  This sampler is designed to capture particulates 10 microns or less in size (PM 10).  As you can see this is not the same as having a 50% cut point of 10 microns.  And, as was pointed out by a loyal Galson client, the collection efficiency curve for PM 10 and the thoracic fraction are very different. However, SKC does offer another product called the PPI Sampler (Parallel Particle Impactor) that is a true thoracic sampler.

If you look at the top of this blog you can see this graphically.  As can be seen, the red curve indicating the PPI sampler closely matches the dashed thoracic sampling curve.  Because of this fact SGS-Galson has changed its recommendation for sampling the thoracic fraction of H2SO4 mists.

Thanks to the client who brought this to our attention.  The close working relationship we enjoy with our clients enables us to remain at the cutting edge of industrial hygiene sampling and analysis.