My Trip to Shanghai 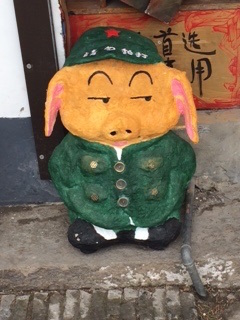 Since early August, 2014, Galson Labs has been a part of SGS, a global company providing inspection, verification, testing, and certification services. Although Galson has always had global clients, being part of a company with more than 1,650 offices and labs in 141 countries has been eye opening.  Thankfully, in the six months since we were bought, I have found SGS to be huge, but very collegial.

The increase in available resources provided by SGS has meant that when a client asks ‘Do you have a footprint in (insert country name here)?”, the answer is very likely to be ‘Why yes, yes we do”.  However, determining how deep and broad that footprint might be, and who is the best person to interact, has meant that I have leaned on people who are unfamiliar with us and have other jobs besides answering my questions.  Thankfully, in the six months since we were bought, I have found SGS to be huge, but very collegial (a marked difference from other global companies for whom I have worked). Working with our US clients to identify and provide an offshore IH resource has become a larger part of my role, and one I have been enjoying very much.

One of the other neat things about being acquired by SGS is that Galson is seen as a “Center of Excellence” by SGS for Industrial Hygiene. SGS has major IH labs in the United States, Spain, Brazil, and China, along with smaller IH facilities within labs in other countries.  One of the reasons we were bought is to transplant the programs and procedures that have endeared us to our clients to other SGS IH labs around the world. Ed Stuber, Jim Trainer, and I are being given the opportunity to consult with our coworkers in other countries to both share what we have learned during our careers and to learn how IH is approached in other countries.  In December I traveled to Shanghai to tour the SGS IH lab there (an AIHA accredited lab) and meet with field consultants. At the same time, Dr. Dongni Ou, a senior staff from the Shanghai facility, came to Galson to spend a month learning how we do things.  It was my first trip to China and it was eye opening.

First of all, Shanghai lives up to its star billing very nicely.  It is huge, beautiful, and frenetic. Working in Shanghai is seen as the Chinese equivalent of working in Manhattan. It was not as congested as I expected but the traffic was probably worse than anything experienced in Los Angeles or London.  It can literally take hours to drive across the city and all schedules are made with this thought in mind.  The SGS IH lab, the only AIHA accredited laboratory in China, is located in a technical park, and occupies parts of a six story building along with SGS environmental and pharmaceutical labs. Since this accreditation means that it is ISO 17025 accredited, I was able to easily identify the same processes that take place in all such labs.  However, asking questions and gathering information was made difficult by the language barrier, although everyone tried very hard. Once again, the SGS culture meant that everyone was eager to share information and were open, in fact eager for suggestions.  As we speak, my observations along with what Dr. Dongni Ou learned in Syracuse are being processed for implementation.

I was also able to participate in a field exercise with three Industrial Hygienists from SGS.  We travelled to a huge tire factory about three hours northwest of Shanghai via bullet train. The train was fast, smooth and comfortable. In fact, my coworkers preferred them to flying because of a more convenient schedule and the ability to arrive at the urban centers rather than outlying airports. It remains a little embarrassing to me that these trains exist just about everywhere but in the US.

The next thing that is easily noticeable is that air pollution is a problem in China similar to the 60’s and 70’s in the U.S. Coal is burned as a primary heat source and the smog is made worse by a winter marine layer that concentrates it.  I had to close my hotel window to avoid smoke coming in.

That problem was counterbalanced by the lack of things that in my naiveté I expected to see. The Chinese are not the homogeneous mass of worker ants portrayed by some news outlets but appear to strive very hard to foster and value a sense of individuality.  The workplaces, at least the ones I saw are not dens of horror and exploitation but were modern, clean, and staffed with employees that cared as much for their safety and well-being as anywhere in the US.  However, I have to point out that I was at facilities co-owned by western companies that applied the same workplace standards in China that they do in the rest of the world. My coworkers were highly skilled technically and had a deep understanding of both the Chinese regulations and how the regulatory system worked.

At any rate I enjoyed my week in Shanghai a lot, was impressed by my SGS compatriots there, and look forward to doing more of this consultation in the future.