Adventures at the U.S. Department of Labor 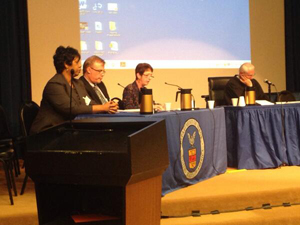 On April first I had the experience of testifying about the proposed new silica standard at the U.S. Department of Labor in Washington DC.  I did this in my role as Vice-Chair of the Analytical Accreditation Board, testifying on the portion of the proposed standard requiring a lab to be accredited.

However, because an industry group submitted a study suggesting that “AIHA labs could not accurately analyze silica at the proposed levels”, much of my testimony revolved around the validity (or lack thereof) of this study.

First of all, it was a political exercise with very little hard science involved.  The room was evenly divided between those against the proposal and those in favor of it (basically industry versus labor). The point of the testimony was to get statements supporting a position into the record while nullifying or at least minimizing the impact of an opposing statement.  This is probably pretty obvious to everyone, but it was surprising to actually see it in operation. It was also REALLY surprising to see people, who I know do silica analyses on a daily basis, perform as hired experts saying the method was inaccurate.  I’ve talked to some of them and some were quick to state their opinion was pertaining to the 25 microgram proposed PEL, others were trying to establish themselves as “friends and knowledge resources for the industry”, and some just wanted to take the money and run.

My testimony consisted of reading a prepared statement and then answering questions.  Due to time constraints, my reading of the statement was stopped and the rest was just entered into the record.  This was done so that the audience and the OSHA panel could ask me questions. This brings up my second point.  The judge and the OSHA panel had to have the patience of Job to sit there for three weeks and listen to person after person read testimony in what was usually a dry, monotone manner influenced by their ability to read.  I listened for two hours prior to probably doing the same thing and it was painful.  Those people had been doing this for THREE WEEKS!  Anyway, when the judge said to move on to the Q&A, the energy in the room increased dramatically.  This was obviously the fun part and why everyone had come.

I answered the questions to the best of my ability (I am quite familiar with the analytical method, instrumentation, and the submitted study).  The questions tended to be more statements than questions and the judge stopped the questioners several times, at one point actually saying, “Are you asking a question or testifying”.  Again, the point of the exercise was to get your viewpoint into the record.  I enjoyed it as I was sure of my facts and enjoy a good verbal tussle.  I would enjoy doing it again.

Here is my opinion of the proceedings:

1)      Nothing may happen for a couple of years.  It is my understanding that now that the comment phase is over, it can be up to two years before the final rule is issued, at which time multiple lawsuits may ensue.  If the IH community is frustrated with the length of time it takes to promulgate a new standard, believe me, many people at OSHA are just as frustrated.  Although I’ve always suspected it, actually seeing the building of the political roadblocks was enlightening (and a little sad from a professional viewpoint).

2)      No one is absolutely wrong in this debate.  The current standard is completely outdated.  But industry is correct in that the current regulations have not been enforced properly.  Just today I had a phone call from a CIH who talked about a road construction project where the cement cutting produced a cloud that was almost impossible to drive through and covered a whole neighborhood.  Obviously this violated a whole slew of standards (PM10, Total Dust, Respirable Dust) beyond silica.  The situation could have been easily rectified in this area because water to do wet cutting was readily available – where was the enforcement of current standards.  I somewhat agree that the good guys spend the money and are affected by the standards, while the people endangering their employees are less affected.

3)      It is REALLY important that the lab you use be accredited to ISO 17025.  This at least lays a ground work for quality results. Just remember that accreditation does not guarantee accuracy.  It is a basement standard of performance, not a ceiling.

4)      Just because the lab is accredited, that doesn’t mean they will be good at what they do (although it helps).  As in anything else, picking a lab is “buyer -beware” and you have to do your homework. Ask to see your lab’s QC data on intra-batch samples, LOQ studies, and ask them how they deal with all the interferences known to be a problem.

5)      I am absolutely confident that the analytical method can be done with acceptable accuracy and precision.  I am just as sure that it produces horrible accuracy and precision if not done CAREFULLY.  Sample prep is critical as are the instrument parameters used to analyze the samples.  Silica analysis is a perfect example of “haste makes waste”.  A great deal of variation can be  caused in the step where the sample is redeposited from the collection filter onto the silver membrane filter used in the analysis.  It has to be slowly and carefully done.

6)      In the same manner, good labs assume there will always be an interference and proceed accordingly, including a muffle furnace or similar step in the digestion procedure.  PAT samples have some interference present in them. Labs that don’t take this into account will get burned, as will the people who use them. Again, Caveat Emptor. However, not informing the lab about where a sample has been taken and if any KNOWN interferences are present is just tying one hand behind the lab’s back.

7)      I am ABSOLUTELY confident in Galson’s ability to produce accurate and precise results at a PEL of 50 micrograms per cubic meter.  I also believe that we could produce valid data at a level of 25 micrograms per cubic meter, with a few more method modifications. I am just as certain the other labs that I’ve been associated with over my 30 year career also generate good data (although a paid expert from one of those labs testified otherwise!).  I am also just as confident that there are some labs that simply do not do the analysis correctly.

8)      Do your homework, ask the right questions, inform the lab about where you are taking the sample and what possible interferences there may be, and you’ll get great results.  And, that applies to any lab analysis.

We use cookies to ensure that we give you the best experience on our website. If you continue to use this site we will assume that you are happy with it.Ok